Go Back to Car Culture
2

An Electrified Corvette ?
the last V8 made? 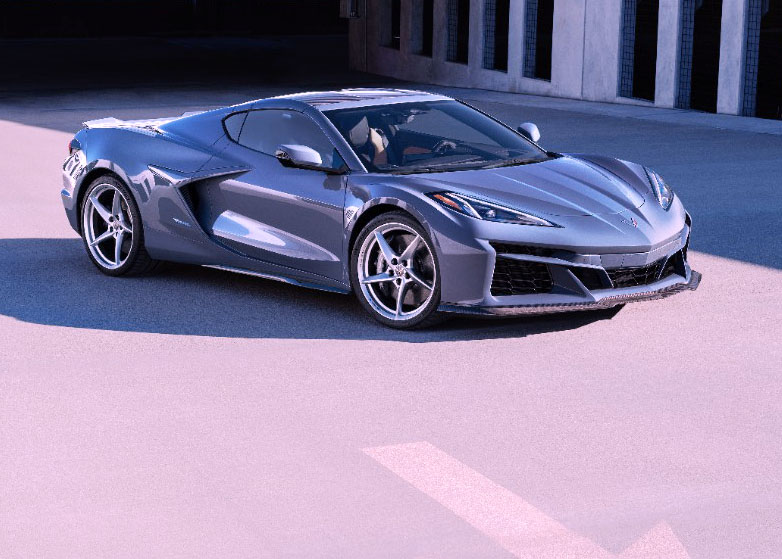 Seen, touched, and reviewed by Ricardo Rodriguez-Long
Coinciding with its seventieth anniversary, GM launches the hybrid version of the Corvette. Little by little, General Motors continues with the transition of electrifying its entire range of models. Still, an electric motor in a Corvette is significant for those who like the iconic car.
In addition to a special color, unique wheels, and using the wide-body of the Corvette Z06, the rest has not changed physically. It's already a beautiful car, and Keith Bennion, GM Designer, showed me the small details but overall the E-Ray doesn't need any visual upgrades.
The most significant thing is hidden in the frame's central part.  Aaron Link, global vehicle performance manager for GM, was kind to show me and explain the changes. What became obvious is that this electrification was planned long time ago when the C8 was in its planning stages.  A system of eighty lithium-ion cells is grouped into four packs with a capacity of 1.9 KWh. Placed in the center of the car and next to the driver, this battery pack gives power to an electric motor placed in the front end. Despite the low electrical power, this motor is capable of producing 160HP that goes directly to the front wheels of the car. In this way, now, the Corvette E-Ray becomes AWD (all four-wheel drive).
These additions of the electrical components require a much more complex cooling system. Radiators have been added to cool the batteries, electric motor, and the computer that runs the front electric motor in sync with the rear-mounted V8 engine.
The heart of the E-Ray remains the famous 495 HP high-output LT2 V8 engine. The transmission that matches the rear axle is the same as the other Corvette models. The sound from the exhaust pipes remains for enthusiasts to enjoy the roar of the eight cylinders. This electrification of the Corvette is more than anything to improve the car's overall performance at high speeds. Although it is classified as a hybrid (because of its two engine alternatives), this is not a vehicle developed to conserve energy. No sports car is.
This version of the Corvette E-Ray has a modification in the front suspension due to the incorporation of the electric motor and the axle shafts that reach the wheels. The modification is simple and effective. The wheels are unique for this model, and the brakes are of carbon fiber, the same used on the fastest Z06 carbon fiber version. Michelin engineers work to develop a special tire to improve the front traction of this model.
The E-Ray now transforms into a 655-hp capable hotrod that accelerates from 0-60 mph in 2.5 seconds and delivers more adrenaline to the driver than a Z06.
The price will be around $104,000, and it will be available later this year. Today's youth may need to become more familiar with the original 1953 Corvette. A car with a one-piece fiberglass body and a straight-six engine that produced 150HP. Back then, it was a revolution. The E-Ray 2024 could be the last Corvette with a combustion engine like the first one and would close a chapter in the history of General Motors.

An Electrified Corvette ?
the last V8 made?