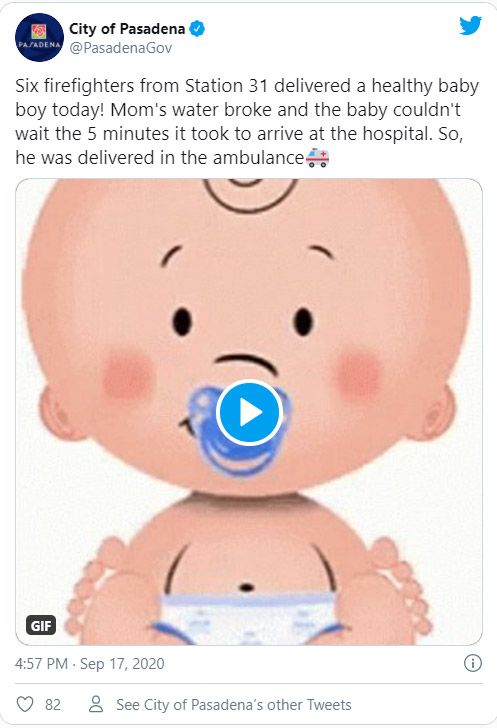 Firefighters deliver baby in a California couple’s living room
A Pasadena couple was planning to deliver their first baby in the hospital, but the baby decided the couple’s living room was more his style — and Pasadena firefighters were there to accommodate.
A Pasadena couple was planning to deliver their first baby in the hospital, but the baby decided the couple’s living room was more his style — and Pasadena firefighters were there to accommodate.
Firefighter Aaron Boykin was sitting in Station 31 near Old Town when his team raced out after getting a call for a woman in labor on Thursday, Sept. 17. The couple’s home wasn’t far from the station, or the hospital, but this baby wasn’t waiting.
Minutes after Boykin walked through the door of the couple’s home and helped mom onto the gurney, she told him: “The baby’s coming right now,” he recalled in an interview.
They were walking out the door. The hospital was five minutes away. The baby couldn’t wait that long.
“We checked and the baby was ready to come into the world,” Boykin said with a little chuckle. “So we delivered the baby on the gurney” in the living room.
“Luckily, there were no issues, no problems,” he continued. “Healthy baby boy was delivered, mom’s doing great. It was a very smooth delivery.”
Boykin delivered the infant alongside firefighter Scott Henderson.
Wildfires, knock-downs, structure fires — these are the things you’d expect a firefighter to have experience doing — but delivering babies? Yes, they do that, too. And for Boykin, this was his second time in two years.
When asked if he was nervous this go around, Boykin said they’re constantly training for this sort of thing — among others — practicing on manikins which “definitely helps keep the nerves calm.”
The same couldn’t be said for the soon-to-be dad.
“Obviously dad was nervous and anxious at the same time, but once the baby was delivered, they were both extremely ecstatic,” Boykin said. “They told us we were there in the nick of time. They were extremely happy.”
The entire family was transported to the hospital after the baby was delivered, and Boykin said they’re still in good spirits.
Given that it was the mother’s first child, such a speedy delivery was unexpected, he said. Usually, the first baby takes a bit longer to deliver.
“But sometimes the baby just decides he’s going to come out,” Boykin said. “It’s always exciting to bring new life into the world and share that experience with parents, especially new parents.”
But doing a delivery like this is no joke.
“These are high-risk calls with low frequency,” he explained, saying they train constantly for these situations to keep their skills from getting rusty. “Usually we can get them to the hospital, but it’s nice to see all the training and preparing you’ve been doing go to good use.”
A global pandemic doesn’t make things any easier, but the firefighters come prepared, dressed in gowns and face masks and other protective equipment.
He was grateful for a fairly experienced team for support.
While Boykin’s crew has not been sent out to the wildfires yet, several other crews from Pasadena have been deployed around the state, including some on Mount Wilson.
Boykin’s team could rotate out to one of the many wildfires in California sometime soon, depending on the schedule.
“There’s no such thing as a routine call,” city spokeswoman Lisa Derderian said in an interview. “You never know what your next call will be, but this puts a bright spot in the very difficult times we’re experiencing.”