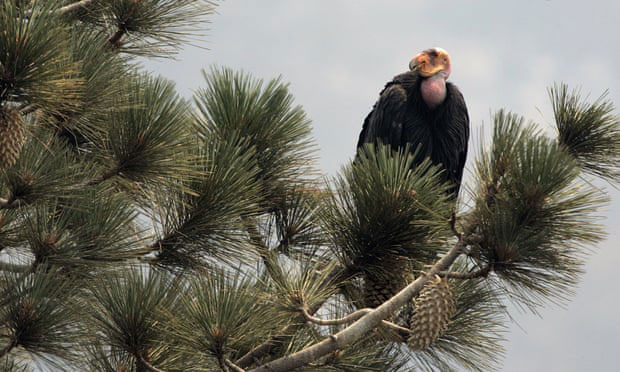 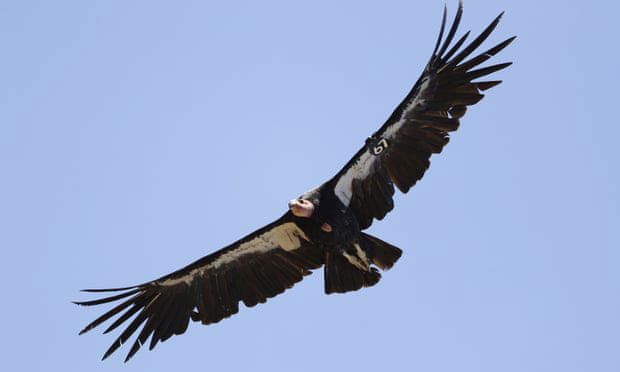 The California condor’s reintroduction has been led by the Yurok Tribe. Photograph: Marcio José Sánchez/AP 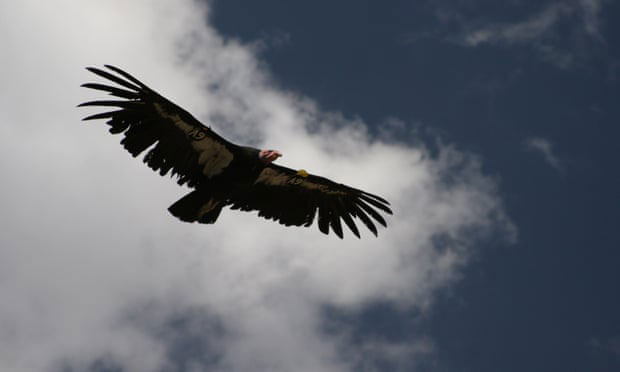 Endangered condors return to northern California skies after nearly a century
Yurok Tribe will create a captive breeding facility in Redwood national park for birds that could be released as early as this fall
After a century of absence, the endangered California condor is set to return to the skies of the Pacific north-west.
The condor once soared from British Columbia to Mexico, but habitat loss, overhunting and, most significantly, poisoning from hunting ammunition drove the birds to near extinction.
By the early 1980s, these threats had caused such a precipitous decline in the population that only 22 remained in the wild. In an effort to regrow their numbers, biologists captured the remaining birds and began a breeding program.
Since then, the condor has been reintroduced to south and central California. Its population has expanded into parts of Utah, Arizona and Baja California in Mexico, with experts estimating the number of free flying birds at more than 300.
Wind power company vows to help save critically endangered California condor
Read more
Now, the bird will be reintroduced in northern California. The reintroduction efforts there have largely been led by the Yurok Tribe, whose ancestral land encompasses large swaths of forest and coastline in northern California and parts of Redwood national park that were once home to the condor.
The tribe has planned for the bird’s return for over a decade, and its proposal was accepted on 24 March by the US Fish and Wildlife Service.
Through close collaboration with Redwood national park, the tribe will begin the creation of a captive breeding facility within the boundaries of the park. The facility will house captive-bred condors that could be released into the park as early as this fall.
Although the condor population is on the uphill, its survival in the Golden state still faces challenges. California has banned lead shot and ammunition, but the laws are unlikely to completely eradicate the lead poisoning problem. Poaching of wildlife and illegal use of lead ammunition could still pose a risk to wildlife and any reintroduced condors, said Chris West, the Yurok Tribe’s condor program manager.
Yet West is hopeful about the bird’s future. Starting this new population of California condors in the far northern portion of the state could offer the bird a better chance at continued survival overall, he argued.
“There’s a big success in the number of birds out there, but you don’t want to put all your eggs in one basket,” West said.
Increasing the population could also help buffer the species against the increasing effects of wildfires, climate change and loss of genetic diversity. Condors are an important part of a healthy and functioning ecosystem. As scavengers, the birds are an essential part of nature’s clean-up crew.
Strong, big beaks allow them to open fresh carcasses, a task too difficult for their close relatives, the turkey vulture. Their efforts allow other wildlife to access the carcasses, and accelerates the recycling of nutrients on the landscape.
For the Yurok people, the return of the condor presents a milestone. The condor plays a critical role in the people’s tradition and culture, and the return of the bird to ancestral territory brings with it a sense of renewal for both people and the land, said Tiana Williams-Claussen, the director of Yurok Tribe’s wildlife department.
In 2003, the Yurok elder community identified the bird as the single-most important land animal to bring back to ancestral land. The reintroduction program was born only a few years after that decision, according to Williams-Claussen.
“When I actually see a condor in the sky again,” Williams-Claussen said, “it’s just mending that wound that was carried by my elders, is carried by me and that, at least in part, is not going to be carried by my children.”