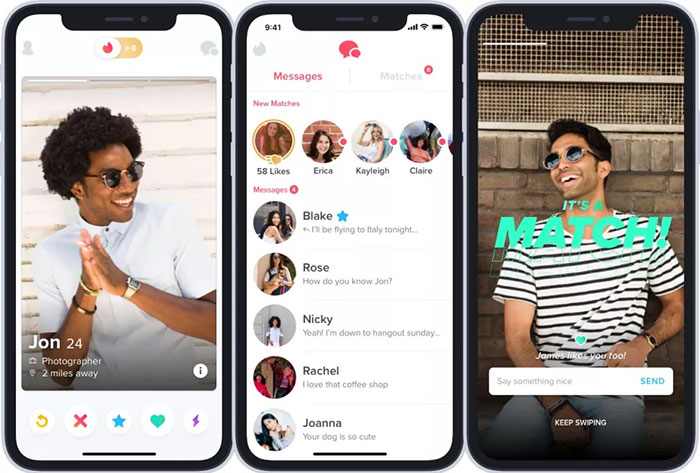 Tinder review
Tinder kicked off the swiping craze – but is it still king?
OUR VERDICT
Tinder is best known for fueling casual flings and friendships. While there are some users on there looking for serious relationships, it’s not our top recommendation for long-lasting romance.
+ FOR
Biggest user base of all dating platforms
Really intuitive interface
Free, unlimited messaging
- AGAINST
Focused on casual relationships
Tinder has a reputation as a platform that’s geared towards hook-ups and casual encounters. For the most part, that reputation is well-earned, which is why it doesn’t rank highly in our list of the best dating sites and apps for 2021.
That said, it does offer a genuinely fun experience for people who are looking for casual dating. It has an addictive swiping system, a quick set-up time and a huge user base of people looking for laid-back relationships.
Tinder: The best features
Unlike some of the other dating platforms we reviewed, Tinder’s free package is really all you need to get started. Accessing the basic membership allows you to message other users freely and you get up to 100 “right swipes” a day. (These swipes work in the same way as “likes” on other platforms, so that’s a lot of potential users you could be swiping right on.)
The innovative swiping system is part of what makes the experience feel like a game. It’s all too easy to sit down for a quick peruse of the platform and find yourself, an hour later, still flicking left and right on the pictures and mini bios that appear on your screen.
In addition to being somewhat addictive, Tinder also has the biggest user base of any digital dating platform. This should mean that you get to see plenty of other singles but, in reality, people living in cities and densely populated areas will still have access to a greater number of matches. To combat this, Tinder has allowed users to widen their search radius to up to 100 miles away, but you can also narrow it down to a one mile range.
Users can forego the app version and access Tinder via the site – although the absence of the swiping mechanism does take away some of the fun. The site works the same way as the app, with the addition of a small “Meeting Notes” button you can click to open a fake document. Presumably, this is so that you can quickly hide your browsing session when your boss walks behind you at work.
Once two people have swiped right on each other, the messaging can begin. Tinder doesn’t allow users to send photos on the platform but the new video chat function means you can engage in some digital flirting with your matches. Deactivating your account is a pain-free process and you can report any inappropriate behavior easily.
In our tests, we set up three fake accounts and swiped right on the first 30 profiles we saw. We got an average of nine matches over 24 hours with all three accounts, though the man seeking woman account brought the average way down with only one response. Of the matches we got, 7% were "super likes” and we received an average of six messages in 24 hours.
Tinder: The drawbacks
The original purpose of Tinder was to encourage people to connect with singles outside of their usual social circle. Because of this, the platform has a deliberately pared-back filtering system and you can’t really put in details about what you’re looking for in a mate. While this might mean that you stumble across someone you would have otherwise overlooked, it also means that you have to do a lot of swiping to find someone you like. Some LGBTQ+ users have found that they’re often presented with inappropriate matches, despite inputting preferences of certain genders and sexual orientations.
Your Tinder search could take even longer if you’re looking for a serious relationship, as the platform isn’t geared towards long-term romance. While some people will be on the app for that reason, they’re probably in the minority. A survey in 2017 found that most users are actually on the platform for entertainment purposes, while another group claimed to use it primarily as an ego-boosting tool.
On the flip side of that, Tinder can also be quite bruising for the ego. Its fast-paced, aesthetics-focused nature means that rejections feel quite personal.
The final big flaw with Tinder is the gender balance, which tips heavily towards the male population. This means there is stiff competition between men – this was something that was reflected in our test, which saw our man-seeking-woman profile only find one match in 24 hours. It’s also mostly populated with younger people, with over half of the user base falling within the 18 - 25 age bracket.
Is Tinder for hookups?
Strictly speaking, no. You do have the option to specify that you’re looking for something long-term when you’re setting up your profile. In reality, the majority of people treat Tinder like it’s a game, using the app for a mix of entertainment, hookups and ego-boosting fun.
Is Tinder free?
Using Tinder is free but you can upgrade to Tinder Plus or Tinder Gold if you want extra features, like unlimited redos on profiles you’ve passed and the option to increase your visibility on the app.
Should I get Tinder?
Tinder is fun and – importantly – it’s also free. Swiping left and right on users’ profiles is genuinely entertaining and the pared back search filters mean that you’re bound to meet people outside of your usual social network.
That said, this is still mostly a platform that’s geared towards entertaining users and facilitating hook-ups, so steer clear of this one if you’re looking for something serious. We recommend trying something like Match.com or eharmony if you’re searching for “the one”.