What It’s Like To Journey Into Sunny Jim Sea Cave
By: LA JOLLA MOM   |  Email: JOLLA@YAHOO.COM 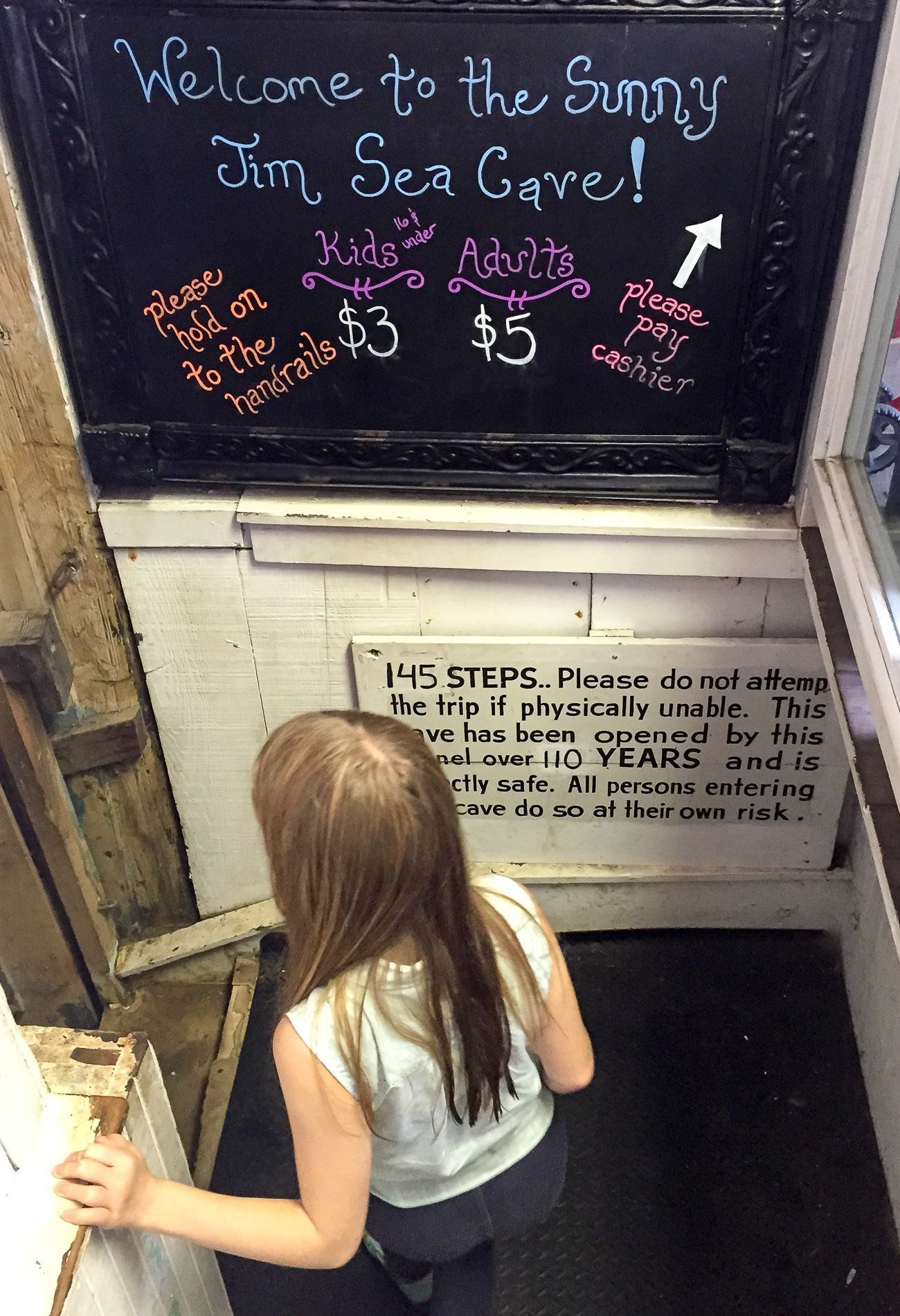 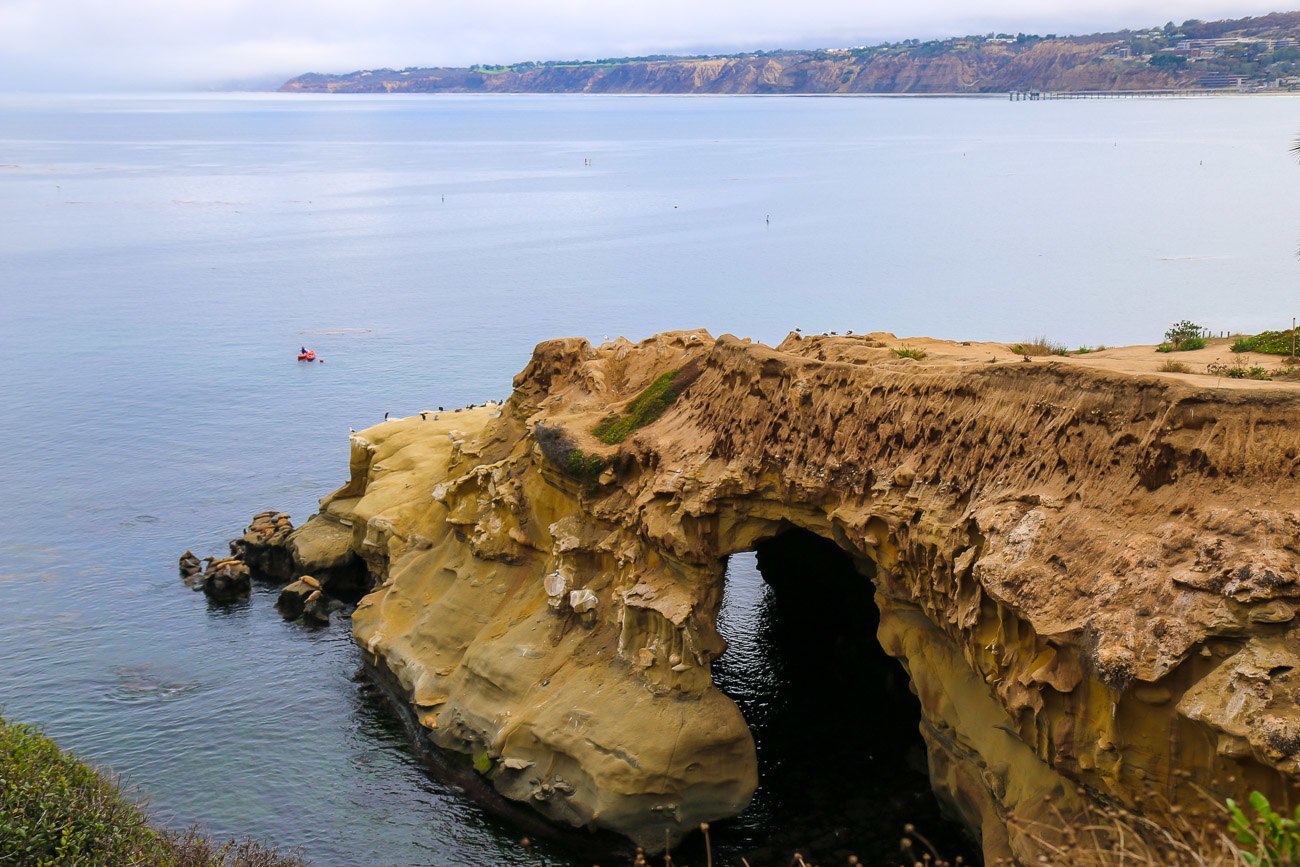 Inside a small wood-shingled building on La Jolla’s oceanfront Coast Blvd lies a beach-themed gift shop and access to one of La Jolla’s coolest attractions. In fact, tourists who wander into Sunny Jim’s Cave Store to browse might just be surprised by the dark tunnel leading down to Sunny Jim cave the only sea cave in California that is accessible by land.
This particular sea cave has an interesting story. A German engineer and philosopher called Gustav Schulz arrived in La Jolla from his native land of Germany, to enjoy his golden years. But his fascination with the sea caves called him out of retirement. He thought that if there was a tunnel to the bottom of what would soon be named Sunny Jim cave, that people would pay to access it.
Work on the tunnel began in 1902. It took two laborers two years to dig it with a shovel and pick. First, guests paid to access the cave via a rope. A few years later, stairs were deemed a better idea and, today, there are 145 of them leading down to a platform that provides guests with one of the most unique ocean views on the West Coast.
Sunny Jim was given its name by Frank Baum, the author of The Wizard of Oz, because the opening of the cave looked like a mascot for a British cereal who was also called Sunny Jim.
If you have some time to spare in La Jolla, a duck into the cave is well worth a few dollars and maybe 30 minutes (at the most). My daughter and I paid the small entry fee (adults are $5 and kids are $3) inside Sunny Jim’s Cave Store and were directed to the entrance.
Leave bulky bags and strollers outside of the cave because you should hold on to the rails with both hands. Because of the moisture and tides leaving water on the wooden steps, they can be very slippery. The woman in front of us lost her footing and slipped. For the same reason, I’d only take a baby in a carrier strapped to me as holding one while navigating the steps might be a bit much.
On the small viewing platform, it’s possible to watch the water flow in and recede and listen to the sounds of the ocean echo around you.
Guests of the Sunny Jim’s Cave Store are prohibited from entering the water from the viewing platform. I caught a photo of a rogue snorkeler who snuck into the cave from the ocean side. I posted the top photo on Instagram and because social media can be such a small world, I learned that the kayaker is not only a guide with Bike and Kayak but that she snapped a photo at exactly the same time.
Crazy, right? Yes, this sea cave was used to smuggle booze during prohibition.
Don’t forget that you have to walk back up the 145 stairs, too. Stopping for a breather is totally normal. Rest assured that there are cameras keeping an eye on guests for safety reasons.
Walk to the left (if facing the ocean) of Sunny Jim’s Cave Store to catch a glimpse of Clam’s Cave, the only sea cave that is visible from the shore. It’s called Clam’s Cave because it’s double-sided—meaning that you can enter it from either direction—like a clam.
There is 3-hour parking along Coast Blvd, but you’ll need to arrive early to snag it. Otherwise, check Prospect Street or park in one of the all-day lots. You can walk down to Coast Blvd via a walkway next to La Valencia Hotel or stairs in the complex that the Crab Catcher restaurant is in.
A stop into Sunny Jim is a perfect way to round-out a visit to La Jolla Cove and the seals. You might even pick up a souvenir or two in the store.
Sunny Jim’s Cave Store
1325 Coast Blvd
La Jolla, CA 92037
(858) 459-0746

What It’s Like To Journey Into Sunny Jim Sea Cave