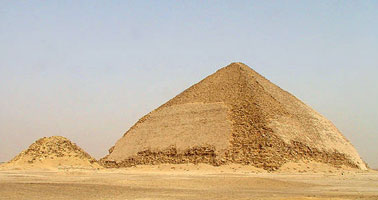 For the first time in over 50 years, authorities in Egypt are reportedly allowing tourists to visit an odd ancient structure known as the 'Bent Pyramid.' The curious construction, commissioned by the pharaoh Sneferu 4,600 years ago, has long fascinated historians because the structure appears almost rounded due to a sharp 11 degree change the angle of the pyramid's sides.

It is believed that this unique shape was brought about when architects saw that the initial angle of the sides proved to be untenable and, therefore, they were forced to adjust the construction of the pyramid in the middle of the project in order to stabilize the structure. As such, historians say that the Bent Pyramid provides a rare glimpse into how Egyptian building practices evolved over time.

Closed to the public since 1965, the structure was finally opened up to tourists once again this past weekend as part of a larger initiative aimed at improving Egypt's tourism industry. To that end, a satellite pyramid located next to its bent counterpart has also been made accessible and the country's antiquities ministry unveiled a number of heretofore unseen artifacts, including mummies which have been unearthed during recent excavations.