Getting in the Loop of Luxury
By: N/A   |  Email: marcusgraydev@gmail.com 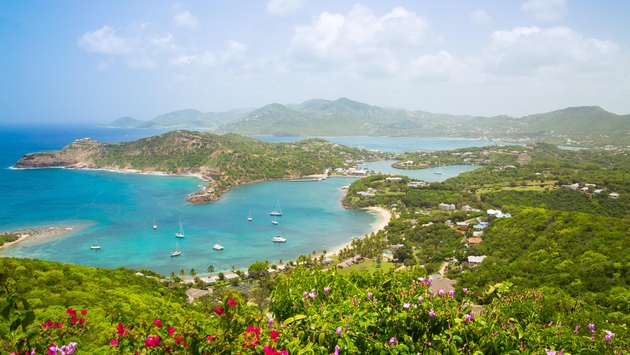 A tropical island is the ultimate luxury getaway for many clients, where they can recline in a beach chair with a cold drink, gaze at an endless blue horizon and let their cares disappear. But other kinds of destinations are staking a claim to luxury, too, with new resorts or less-trodden treasures appealing to globetrotters who want their horizons expanded in a different way.

Here are eight places, some obvious and others less so, to delight and perhaps surprise your clients seeking creature comforts and immersive experiences on their next trip.  Antigua

Since Antigua is home to an abundance of all-inclusive resorts, as well as EP hotels with premium dining, many visitors tend not to venture off the properties for dinner.

Katie May, owner of LuxTravel Katie, based in Port Jefferson, N.Y., said that is a mistake. May, who is also an advisor for Classic Travel Connection, which has headquarters in Birmingham, Ala., told AGENTatHOME she recently dined at Papa Zouk, a restaurant in the St. John’s area of the island that actor Robert De Niro is known to frequent. May recommended the pan-fried whole red snapper; Papa Zouk is also known for its rum collection.

But if it’s an undiscovered hotel your clients are looking for, Kate Konigsberg, an advisor with Epperly Travel in Atlanta, suggested looking no further than Hodges Bay Resort & Spa by Elegant Hotels. “Having recently opened in late 2018, Hodges Bay is the newest luxury hotel option in Antigua with a very contemporary resort feel by the Elegant Hotels group,” she said.

May agreed, describing the resort as “stunning,” and suggested that this is the ideal place for affluent Millennials looking for accommodations on the cutting edge.

And for a new twist on a popular excursion, Konigsberg suggests clients spice up a trip to the popular Nelson’s Dockyard by taking a small boat ride from Nelson’s Dockyard to Gunpowder House & Suites for lunch with a view overlooking the English Harbor.

Numerous experiences are possible in the country, said Tami Cortez, product manager for southern Europe for Avanti Destinations, like a private “Truffle Hunter for a Day” tour (including lunch and wine tasting) and another private tour of the town of Pula, which has many ancient Roman buildings, including the world’s sixth largest amphitheater.

Luxury hotels are opening on a regular basis. According to the Croatian National Tourist Board, recent openings included the Grand Park Hotel in Rovinj, the Hotel Bellevue in Mali Losinj, the D-Resort in Sibenik and the Adriana Hvar Spa Hotel on the island of Hvar. Cortez said the Grand Park Hotel Rovinj is already considered the best hotel in Croatia.

Audley Travel features a Trogir historic walking tour. Guests start the day with a visit to Trogir’s market with a local chef to buy ingredients for lunch. After a walking tour of the medieval town, they enjoy a five-course meal cooked in front of them and paired with local wines.

Croatia is different from the usual glitzy luxury destinations, said Cortez. This is particularly true of the northern Istria region, which is relatively unknown to American travelers, most of whom—if they have visited Croatia at all—tend to go farther south to Dubrovnik, Split and the islands in between. Croatia, she said, is also easily combined with Italy.

Jamaica’s strong hotel development is extending into 2019, with a diverse array of new properties, including the stylish 120-room S Hotel Jamaica, which debuted on Jan. 27 on Doctor’s Cave Beach in Montego Bay. The “multiexperiential” EP hotel offers travelers a contemporary hot spot on Montego Bay’s downtown “Hip Strip,” with trendy bars, a high-spirited pool scene and an exclusive Sky Deck for travelers booked in concierge accommodations.

“We’re creating a new kind of hotel in Montego Bay, one that infuses modern Jamaican culture balanced with the sophistication of an urban hotel and the laid-back style of a beach resort,” said owner Chris Issa.

The all-inclusive, adults-only Excellence Oyster Bay resort opened in December on a peninsula in the Trelawny district. The luxury resort offers all-suite accommodations, a selection of upscale restaurants and bars, plus a full-service spa. The property is located along two miles of secluded white-sand beach.

Donnie Dawson, Jamaica’s deputy director of tourism, The Americas, noted that “luxury travelers can choose from a variety of resorts, namely Trident or GeeJam in Port Antonio, to GoldenEye or Jamaica Inn in Ocho Rios, to Half Moon, Round Hill or Tryall in Montego Bay to The Caves or Tensing Pen in Negril.”

Jamaica’s idyllic natural landscape offers an array of immersive shore excursion options. A case in point is Navy Island, is located off the coast of Port Antonio and once owned by the actor Errol Flynn, where visitors can take a half-mile boat ride for picnics and trail hiking.

Korea is a country of striking contrasts, said Janet Pinyoborisut, product manager for Asia for Avanti Destinations, noting that the country has an ancient, well-preserved, distinctive culture combined with rapid modernization, advanced science and technology, and a thriving gastronomy scene with 26 Michelin-starred restaurants.

Derek Ong, senior destinations specialist, Asia & The Pacific, for Cox & Kings, said Korea has luxury hotels like the Four Seasons and Park Hyatt in Seoul, as well as the Park Hyatt in Busan. It also has the KTX bullet train linking most of the major cities.

Learning about traditional Korean dress with a hanbok fitting and educational lecture is a popular activity. At the Korea House in Seoul, visitors can organize a private experience to try on hanbok (and take pictures) or order a customized garment.

Gyeongju is the cultural heart of Korea, said Ong. It is a former ancient imperial capital, with landscaped temples and gardens, as well as archeological sites. The city has the oldest standing astronomy observatory in East Asia, Cheomseongdae, which was first constructed in the mid-seventh century.

For a first-time visit to Korea, said Ong, Cox & Kings suggests 10 days to cover dynamic Seoul and the DMZ in the north, Gyeongju and its culture and history toward the south, and the regions farther south with their lively markets, stunning coastlines and gourmet food.

In the past five years, Malta has seen a dramatic increase in tourism from the North American market—and most of these travelers seek luxury experiences, said Michelle Buttigieg, representative of the Malta Tourism Authority in North America.

“As the demand for luxury has increased, the infrastructure in Malta has witnessed the expansion and growth of luxury hotels in the past five years—both with the well-known chains and other luxury properties that are members of Leading Hotels of the World, as well as the opening of new luxury boutique hotels that were former palazzos in Valletta, the capital,” she said.

Plus, Malta offers luxury for less. “As you know, Malta is part of the European Union, but the luxury accommodations are not as expensive as similar luxury hotels” in many other parts of Europe, Buttigieg said.

Among the highly rated hotels is the Corinthia Palace Hotel & Spa, which was named Malta’s Leading Hotel for the 11th time by the World Travel Awards. It plans to unveil a new spa this fall, the final phase of a significant refurbishment that also transformed the lounge, lobby and guest rooms.

The sunny islands of Malta, located in the Mediterranean Sea, are home to the highest density of UNESCO World Heritage Sites. The country also has Michelin-star chefs, vineyards and farm-to-table restaurants.

Even before the devastating impact of Hurricanes Irma and Maria in 2017, Puerto Rico was known among savvy vacationers as a treasured luxury travel destination. Now that virtually all its luxury resorts have reopened following the storms, the island again offers vacationers a diverse group of top-drawer properties.

“The island is a luxury vacation destination, and we have exciting future developments such as Four Seasons Cayo Largo, JW Marriott in Dorado and The Ritz-Carlton in San Juan, just to name a few,” said Brad Dean, CEO of Discover Puerto Rico, the territory’s destination marketing organization. “Our lodging options are not limited to hotels – we also have beautiful villas that have become popular among travelers looking for a more intimate and private setting.”

For a somewhat underrated luxury resort in the Doha area, Caroline Fridley, a travel expert with Protravel International in Atlanta, recommended Banana Island Resort Doha by Anantara. “It has a wonderful spa, full wellness program, and does not allow alcohol on property, so it can make for a perfect wellness getaway,” she said, “even as just a two-day stopover between the U.S./ Europe and Asia, for example.”

But George Andritsakis, a travel advisor with Snelgrove Travel Center in Layton, Utah, gave AGENTat HOME a more mainstream recommendation. “When it comes to luxury resorts, you can’t beat the W Doha,” said Andritsakis. The hotel, which has 289 guest rooms and suites and 153 residences, “was designed in an almost boutique style, with the rooms impeccably designed and shaped like pearls, and completely tech-friendly, and very accommodating and serene.”

He added, “Doha is fast becoming another Dubai, Las Vegas, or Macau, but with one positive benefit: not losing its cultural identity as Qatari.”

That’s why Fridley is urging people to go now while the destination is still mostly undiscovered. “Qatar is still a pretty authentic destination all in all, as it’s still quite up-and-coming in terms of American/European/etc. tourist visits,” she said. “The upside to this is that it’s very easy to do what the locals do; the possible downside is that most tourists are also going to be doing the same things. This is also a function of the fact that it’s a small country and nowhere near as developed as Dubai, for example, although it is growing.”

Luxury in Turkey begins at the brand-new Istanbul Airport, a state-of-the-art facility. The country is home to palace hotels, excellent shopping and relaxing cruises. Luxury travelers seeking unusual experiences, said a spokesperson for Turkish Airlines, will find amazing comforts in the cave hotels of Cappadocia; an opulent spa culture; a world-famous cuisine that combines with a thriving wine industry; and glitzy resort towns.

One such town, Bodrum, is considered the St.-Tropez of Turkey, offering luxurious accommodations in a setting that respects the area’s past as a simple fishing village and revels in its jetsetting present. Yacht-lined marinas, casual sophisticated clubs and smartly dressed visitors from Istanbul and other major European cities give Bodrum a French Riviera feel.

Growing in popularity for luxury is Alacati. A chic retreat for residents of Istanbul, it’s where locals go to escape for authentic local tastes and adventure experiences like kite surfing.

Turkey is home to memories that money can’t buy, like flying in a hot air balloon over the fairy chimneys of Cappadocia, where luxury cave hotels are carved out of the soft volcanic stone to create a magical landscape.

The country boasts a large number of luxury hotels, including some that would be at the very top of any market, like Raffles Istanbul, the Ciragan Palace Kempinski in Istanbul, the Mandarin Oriental in Bodrum, the Bodrum Edition, Argos in Cappadocia and Alavya in Alacati on the Aegean Sea.

Getting in the Loop of Luxury

Go Back to Travel / Outdoors